Rev: FELICITA S COS II; Felicitas, draped and diademed, standing to the left, with long sceptre and caduceus.

Clodius Albinus was general in Britannia and one of those who rose against Didius Julianus. He cut a deal with Septimius Severus to support him. In exchange he became Caesar. But Septimius plans changed. When he was emperor he appointed his son Caesar and Clodius knew his days were numbered. He battled it out with Septimius in 197 at the battle of Lugdunum. Clodius lost and took his life. 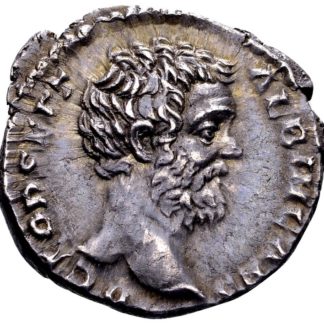