Domitia was daughter of the general Gnaeus Domitius Corbulo, and wife of Domitian. It is attested that Domitia bore a daughter and then a son, whose name is unknown, and who died in his infancy. Domitian subsequently deified the boy, and the reverse type illustrates this with the legend DIVVS CAESAR IMP DOMITIANI F and the depiction of the boy seated on a globe surrounded by the seven stars of the Ursa Major. Shortly after this type was struck, in AD 83 there was a brief hiatus in the marriage when Domitian exiled Domitia for unknown reasons. Suetonius relates that Domitia’s exile was a result of her affair with an actor named Paris, who was murdered on the orders of Domitian ( Suetonius, Domitianus 3). The poet Martial, in one of his epigrams, describes the child scattering snow from heaven on his father’s head, and Domitian smiling with pleasure. 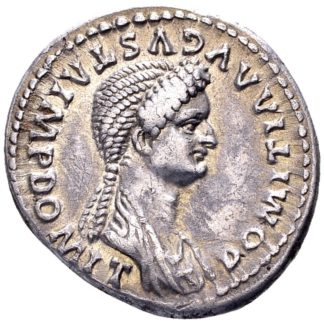