Obv: draped bust of Artemis wearing stephanos to the right, hair tied in bun at the back, bow and quiver over left shoulder.

Rev: Nike, holding kentron and reins, driving fast biga of horses to the right; above: MAΓNHTΩ[N], below: EYΦHMOΣ ΠAYΣANIOY in two lines.

Ref: Unpublished in the standard references.

This previously unknown issue from Magnesia, like similar issues known from Ephesos, Miletos, Smryna, and Tralles, was thought to have been struck in celebration of Mithradates VI’s liberation of the cities from Roman control. New research has now shown that, with a few exceptions, all of these staters seem to have been struck in the mid-late 2nd century BC. The reverse of this coin with Nike driving a fast biga seems to commemorates some victory that had local significance. It may relate to the games of the Leukophryena, an important panhellenic festival in honor of Artemis Leukophryene. 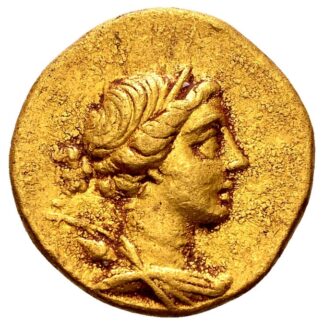