Rev: bow in gorytos entwined by two serpents; to the left: ΠΑ, to the right: elephant’s head.

Apameia was formerly called Pella by the first Macedonians, because most of the soldiers of the Macedonian army had settled in this city. Also, the 500 elephants, which had been given to Seleukos I by the Indian ruler Chandragupta, were stationed here. Seleukos I named the city after his wife, Apama. The elephant’s head symbol on the reverse is a reminder of the Seleucid elephants. Antiochos III used them at the Battle of Magnesia in 190 against the Romans, when he was defeated. He was then, at the Treaty of Apameia of 188, banned from possessing military elephants. Eephants were the ancient equivalent of the modern tank. Of course, against Alexander the Great and against the Roman legions they proved relatively ineffective. 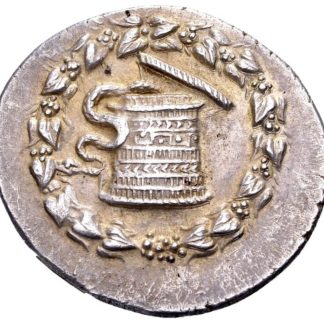