Rev: ROMA; man kneeling to the left between two soldiers, who touch with swords pig he holds in his arms.

This coin seems to commemorate a treaty, but the precise occasion is unknown. Crawford suggests that the coin depicts an oath, adding that it might be a reference to the treaty made by Ti. Veturius Calvinus with the Samnites at the Caudine Forks, as an example of Roman integrity. He also links the scene depicted to the treaty of 137 BC negotiated by Tiberius Sempronius Gracchus, the moneyer’s cousin, during the Numantine War. 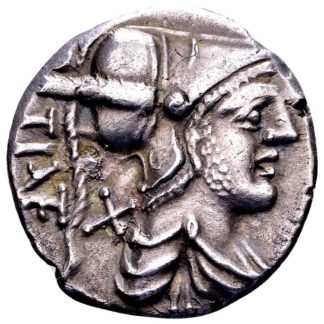